Loans for Museum Exhibits, Community-based Exhibits, Programming, and Cultural Use of Museum Collections

As part of the 2012 In-Community Program organized for the National Museum of the American Indian (NMAI) by Landis Smith, Cathy Notarnicola and Valerie Verzuh from the Museum of Indian Arts and Culture (MIAC) in Santa Fe, traveled to the Ramah Navajo Weavers Association in Pine Hill, New Mexico. They carried with them several nineteenth- and twentieth-century Navajo textiles from MIAC’s collection. Some of these textiles might even have been woven in the Pine Hill area by the ancestors of today’s Ramah weavers. On this day, the textiles were returning to the Navajo Nation for a visit with community members.

The textiles were carefully transported from the MIAC storage areas in Santa Fe to Pine Hill, where the Ramah Navajo Weavers Association was meeting in the community hogan (a traditional Navajo house). They were placed on tables inside the hogan, where the weavers, young and elderly, novices and masters, came to visit them. 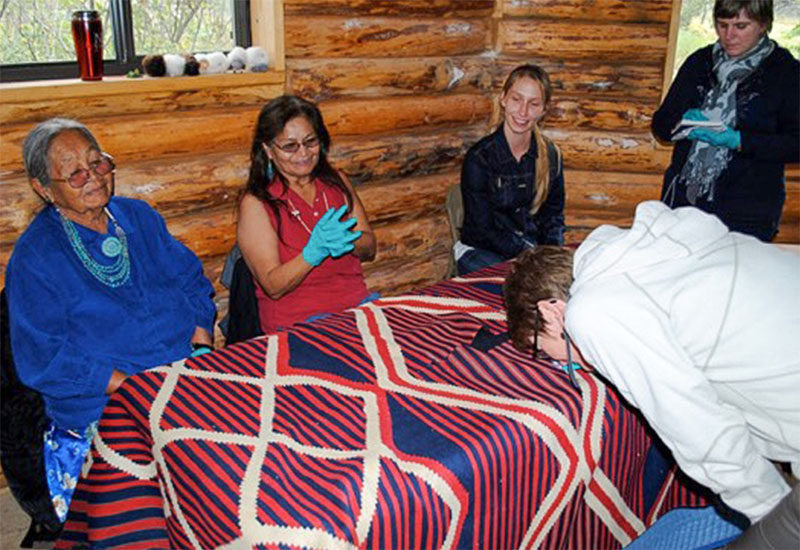 National Museum of the American Indian (NMAI) conservators and Navajo community weavers examine a Navajo poncho sarape (1820–1840) from the Museum of Indian Arts and Culture’s (MIAC) collections. Photo credit: Landis Smith
Deep respect was felt for the blankets and rugs. The weavers sat next to the textiles, carefully examining and commenting in Navajo and English on what they were seeing. Both whispers and laughter were heard as technical traits, such as the warps and wefts, color changes, selvage cords, and design complexes, were discussed, as well as more personal observations regarding the weavers of these textiles.

Observations included speculation as to what the weaver might have been thinking or feeling when she created a certain blanket or rug. How the textile was woven, the colors and designs she chose, and what was happening in her life at the time were all factors that were combined in these creations. 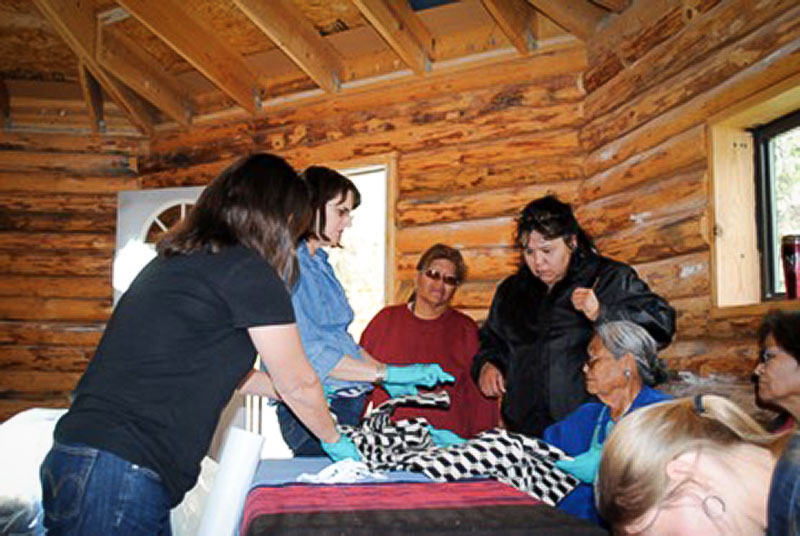 Ramah Navajo Weavers and staff members from the Museum of Indian Arts and Culture examine a Navajo dress woven around 1850 and a Navajo rug from around 1940. Photo credit: Landis Smith
The main focus of the conversations was the processes, thoughts, and lived experiences of the women who wove these textiles. What were their lives like, and what were they thinking when they made these weavings? Were they patient and happy? What prayers and songs did they sing while weaving? 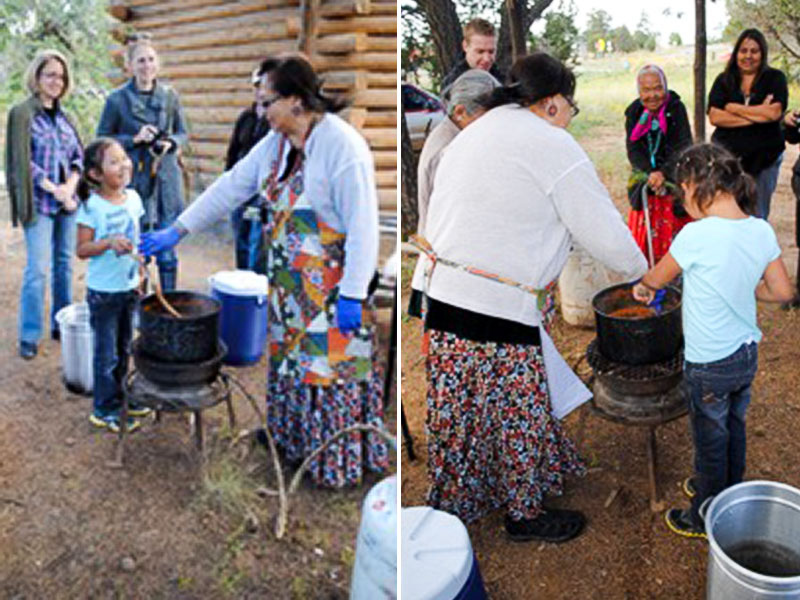 Ramah weavers dye yarn with lichen at the Ramah Weavers Association in Pine Hill, New Mexico
The Ramah weavers expressed their appreciation for the close-up view of the textiles, as most of the women had not had the opportunity to visit the museum. Although many objects in MIAC’s collections can be viewed in its exhibitions or studied in storage, travel to Santa Fe for research is not always possible for people living in rural communities such as Pine Hill. Bringing Navajo textiles to Ramah enabled many weavers, elders, tribal members, and youth to view these remarkable and important textiles of deep cultural, artistic, and creative significance. At the same time, museum staff and fellows learned much from the weavers about processing, dyeing and weaving wool.

Riverside Metropolitan Museum (RMM) is located in part of Southern California where the Cahuilla, Cupeño, Diegueño, Gabrieliño, Luiseño, and Serrano have resided, travelled, traded, gathered and hunted for countless generations.  Many still call it home.

Until recently the RMM did not actively collaborate with the region’s Native peoples.  The first true partnership began with a 2010 Smithsonian Institution National Museum of the American Indian (NMAI) grant for Contemporary American Indian artists.  A Diné/Seminole quilt artist and Museum curator created a ground breaking RMM exhibition “American Indian Women Artists: Beyond Craft”.  Four artists who worked in the traditional American Indian fields of basketry, beadwork, ceramics or textiles were featured.  For them “Beyond Craft” was the first museum exhibition where they chose the art and told about it in their own words.  This was an exciting beginning to Museum collaborations with American Indian peoples.

In 2011, the RMM staff began thinking about a collaborative project with the Cahuilla.  The Cahuilla’s ancient and historic lands encompass the Inland Empire region where Riverside is located.  The Cahuilla are the largest group of indigenous people in Southern California.  An exhibition using the Museum’s Cahuilla basket collection to tell the Cahuilla story was proposed.  Conversations began with Professor Clifford E. Trafzer, of Wyandot ancestry and holder of the University of California, Riverside (UCR) Rupert Costo Chair in American Indian Affairs.  Subsequent meetings with Cahuilla culture bearers Gerald Clarke, Lorene Sisquoc and Anthony Madrigal helped further develop the project.  Sean Milanovich, a member of the Agua Caliente Band of Cahuilla Indians and UCR doctoral student, joined this team to curate the exhibition.

In the summer of 2013, tribal members from the nine Cahuilla tribes and other Native peoples came together to form the Cahuilla Continuum Committee.  Monthly meetings were held at different locations of the nine Cahuilla Tribes.  In Committee discussions the land became a common thread and exhibition themes of the Cahuilla beginning, land, home, plants, clothing, regalia, vessels, sovereignty and living between two worlds evolved.  Gerald Clarke suggested the exhibition title Cahuilla Continuum: Túku, ĺvax, Túleka (Yesterday, Today and Tomorrow), which the Committee chose.  The exhibition materials were written in Cahuilla and English. 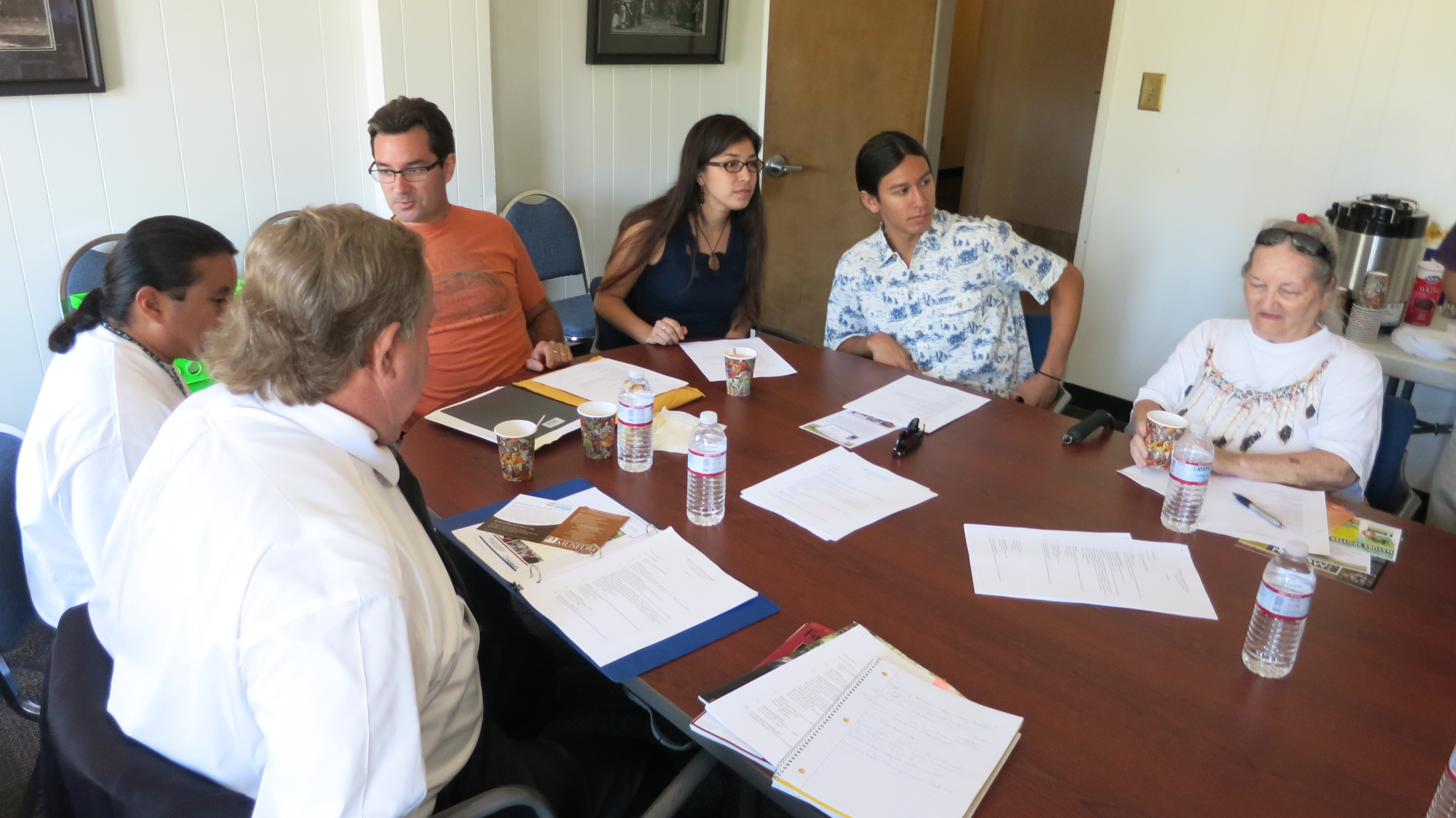 Cahuilla Continuum Committee Meeting at Museum
Courtesy of B. Potter 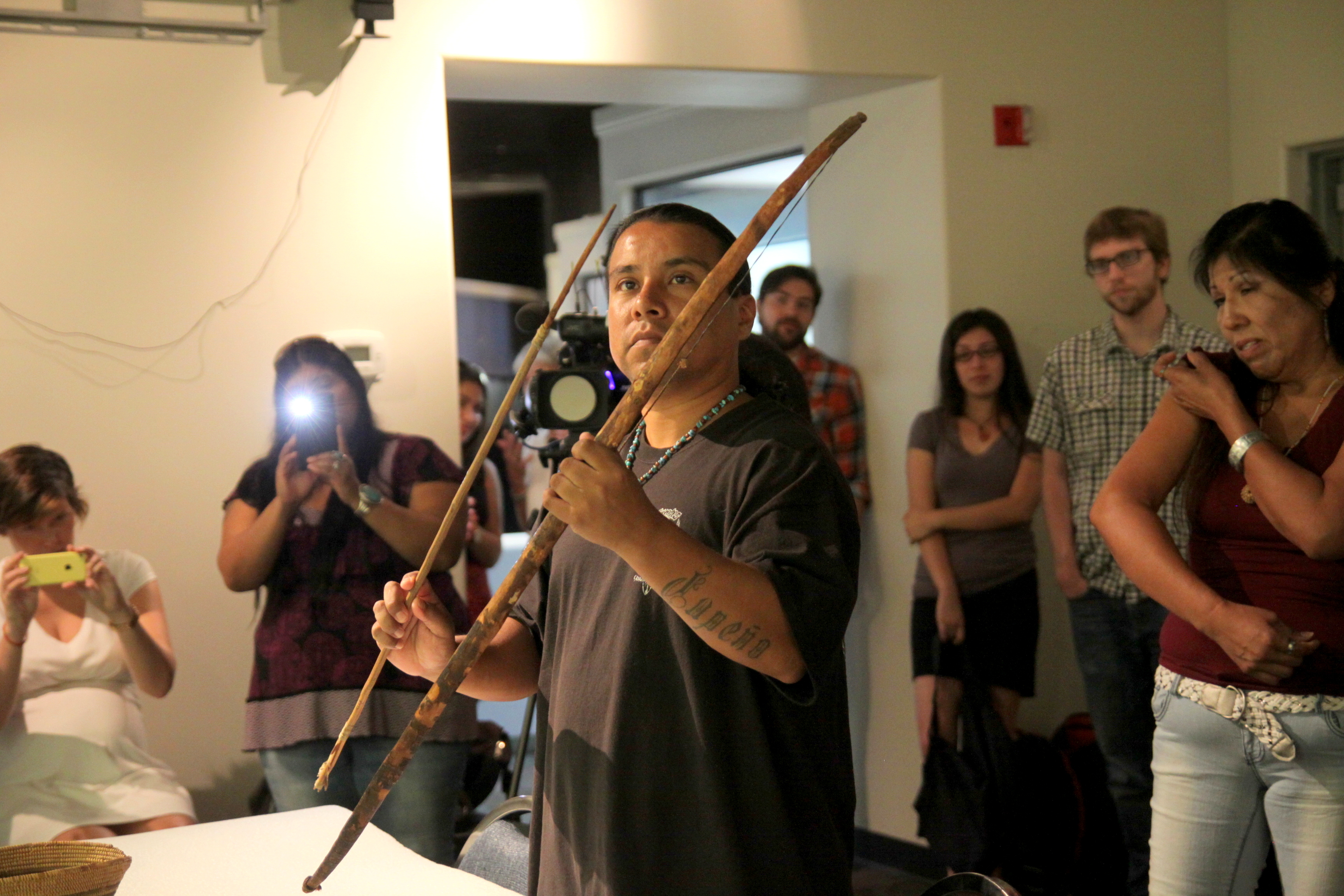 Cahuilla man holding the bow made by his ancestor from the NMAI collection
Courtesy of Riverside Metropolitan Museum
A RMM goal of this project was to bring the Cahuilla heritage back to the Cahuilla people through a loan from NMAI.  In conversations with NMAI staff three Cahuilla objects with known makers were selected.  A loan of these objects was approved.  This loan made a monumental contribution to Cahuilla Continuum: Túku, ĺvax, Túleka.  It had been hoped that descendants of these Cahuilla objects might reside in the community, and they did!
Cahuilla basketry was the way the story was told.  Cahuilla basket weavers visited the storage facility and saw baskets made by their ancestors.  Cahuilla baskets from the storage facility were taken to the Cahuilla reservation where they had been woven.  Cahuilla Continuum: Túku, ĺvax, Túleka brought the Cahuilla people and the baskets of their ancestors together.  It documented and displayed for Museum visitors the incredible artistry of the Cahuilla people.
Cahuilla Continuum: Túku, ĺvax, Túleka opened September 2014. The exhibition was very well received by the Cahuilla people, other American Indians and the Riverside community.  It set a benchmark for the Riverside Metropolitan Museum and its collaboration with the American Indian community.

The RMM has continued its collaboration with the region’s Native peoples.  In 2016 a workshop on “California Tribal Baskets: Creation, Culture and Conservation” was held for all Native peoples with an interest in California tribal baskets.  As well, a loan between the Museum and the Pechanga Band of Luiseño Indians brought a RMM basket to Pechanga and a Pechanga basket to the RMM.  Currently an exhibition is in the initial stages of development in which baskets from the Museum collection will be exhibited at a Tribal facility.

MISSING IMAGES (Mentioned, I cannot find the content in any submissions): 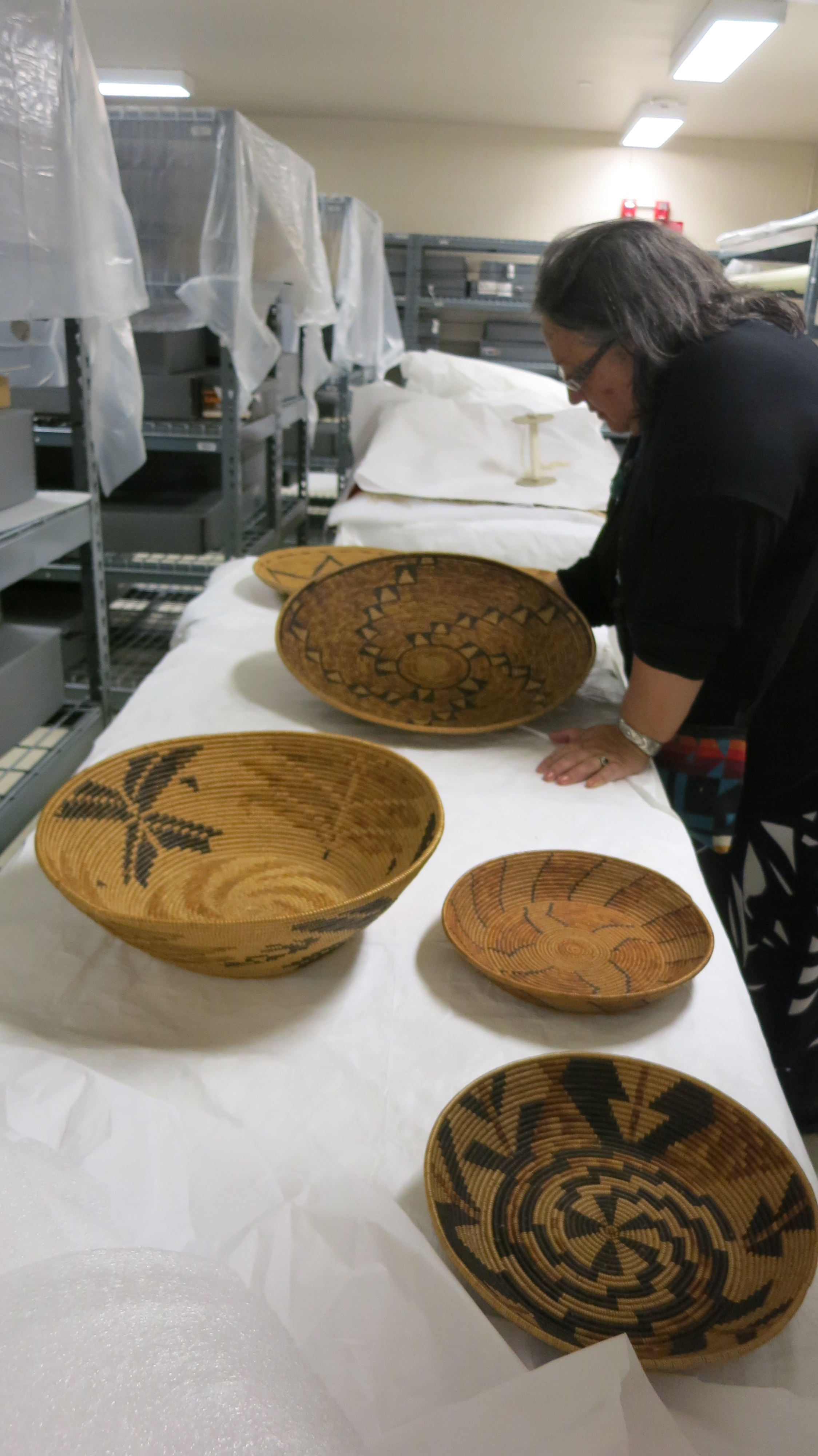 The Museum of Indian Arts & Culture’s (MIAC) mission is to serve as a center of stewardship, knowledge, and understanding of the artistic, cultural, and intellectual achievements of the diverse peoples of the Native Southwest.

Since that time the museum has developed an individually catalogued collection of over 75,000 objects and an Archaeological Research Collection (ARC) of 8 million artifacts. The museum serves as a repository for archaeological material excavated from state lands. This material is held at an offsite facility, the Center for New Mexico Archaeology. In addition, the Center curates material for some federal agencies and tribes.

The museum’s holdings represents many tribal communities of the American Southwest and since its early days has worked with tribal residents to interpret and develop its collections. In these earlier times the relationship between Native people and the museum was largely unbalanced with community members used as labor, translators, and their interpretive efforts filtered through an western academic lens.

After the opening of the MIAC in 1987, there were plans to create a core exhibition to tell the story of the Native Southwest with greater community input and collaboration. These plans came to fruition in the mid-1990s when the museum’s permanent exhibition, Here, Now and Always was funded and developed. Here, Now and Always was a pioneering effort in museum interpretation where Native voice was given prominence. Stories from named individuals were featured before standard museum interpretation. Objects supported text rather than the opposite. The exhibition was organized by themes such as cycles, trade and exchange, arts and ancestors. The items selected were featured not by time or place but rather how they related to the theme and stories being told.

The exhibition featured innovative aspects such as a “warning panel” before the Ancestors section which informed the visitor how Native people view material culture differently and the diverse perspectives between tribes. Timelines were regulated to object label information so the visitor could see the cyclical view held by many Native communities of the Southwest; artifacts and contemporary items have multiple and repeated uses and meanings.

The museum now hopes to update the exhibition yet hold onto the framework that made Here, New and Always a success.